One time, I was really excited to go home.

I had just gotten back from Jackson Hole, and I was going back to Kentucky.

Our flight landed at 11:30a. There was a flight into Cincinnati at 11:55a. As much as I loved to believe that  we could have deplaned in less than ten minutes, it is physically impossible.

The next flight wasn't until 5:30 that evening. That's fine by me. It was solid quality time that a lot of flight attendants like to refer to as, "Airport Appreciation."

Because our lounges make me slightly depressed (I really, really love windows), I changed out of my uniform and parked myself at one of the charging stations to listen to some music and maybe watch the latest episode of Project Runway.

As the hours passed, the weather started rolling in. And the flights started canceling. My flight home was pushed back until 8:30. And then proceeded to push back an hour, about every fifteen minutes.

My report time that morning was around 4a, so I was quickly reaching the delirious phase. Which, is actually awesome because one reaches a certain point of apathy and finds humor in just about everything.

The throngs of disgruntled passengers started to become mutinous, and I thought it best to retreat to the core of the earth with my other stranded co-workers.

Please imagine a room full of uniformed flight attendants unable to go anywhere while the finale of The Bachelorette aired. The commentary on the show almost made me cry because everyone was so sassy and it made me laugh a lot.

One of the guys (also trying to get back to Cincinnati) then said it:

"Does anyone want to go as my guest to the Sky Club?"

Where there is the finest display of airport hierarchy. While everyone else is sitting on the floor and eating overpriced airport food, the club members get to avoid the common folk and eat free snacks and have free drinks. 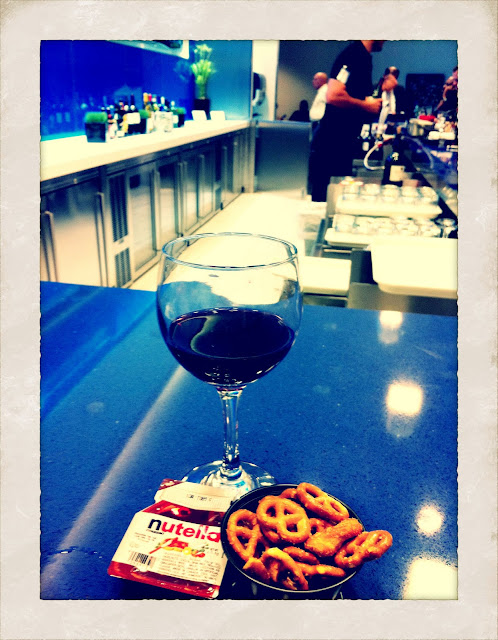 NOT TO MENTION, TINY PACKETS OF NUTELLA.

I noticed immediately that even as a guest, it is important not to gawk. And you have to act like you belong.

As I was sitting at the bar, enjoying the above snack, a man with his briefcase walked briskly across the marble floor to grab a seat in one of the plush chairs.

He slipped. And tumbled.

And because I am absolutely incapable of not laughing when people fall, and because I was really tired, I was in a fit of convulsion as I tried not to laugh audibly.

The room was silent as the man rambled a string of expletives.

Beneath his foot was what appeared to be a streak of Nutella. Or maybe poop. But I'm pretty sure it was Nutella.

It was enough to keep me going. Since, my flight didn't leave until 2 in the morning.