"I am a woman built upon the wreckage of myself."

Books and words are precious to me.

With the in between and down time that comes with my job, I read a lot.

Sometimes, it ends up being five books at a time because I am so easily distracted and smitten with new ones.

No, I do not have any kind of e-reader. Yes, logistically, it would make sense for me. But I just can't.

Here's why. (In case you were wondering).

I flew the red eye back from Los Angeles with a girl that loved to read just as much as I do.

Chris Cleave received a great deal of acclaim for his book, Little Bee (click for my mini review).

It was beautifully written, but I was glad to leave it behind because thematically it was so heavy.

Even in the several times I picked up Incendiary at the book store, I just couldn't bring myself to buy it because Little Bee left me so tired and sad.

But I had several hours to myself. And my new flight attendant friend offered it to me since she had just finished it. And I accidentally read it in its entirety in a little over four hours. 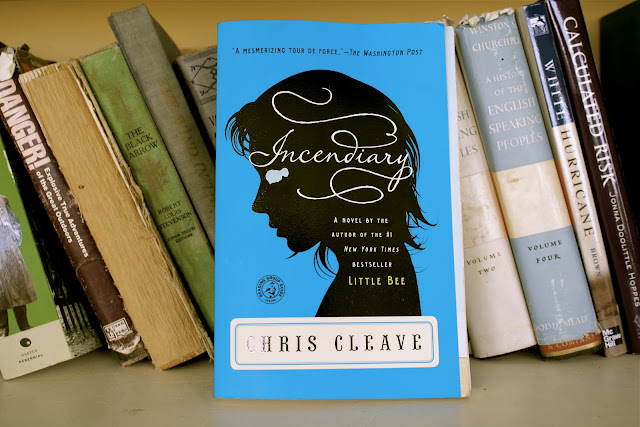 Cleave wrote Incendiary well before Little Bee in what he described as 'six insomniac weeks in 2004' right after his son was born and he found himself horrified by the world he was born into.

"In an emotionally raw voice alive with grief, compassion, and startling humor, a woman mourns the loss of her husband and son at the hands of one of history’s most notorious criminals. And in appealing to their executioner, she reveals the desperate sadness of a  broken heart and a working-class life blown apart." (source)

It seemed to have been written in a frenzy, about a woman that I found very hard to know. Her selfishness and detachment made it difficult to empathize with her as much as I wanted to.

The stunning prose I devoured in Little Bee was thrown to the wayside as the punctuation and grammar was neglected in order to portray the voice of a woman lacking in finesse and social graces, but well acquainted with grief. (It's similar to The Color Purple in that it takes a few chapters before feeling familiar with the dialect and voice).

While I appreciated Cleave's ability to write about such a grotesquely bizarre story of grief, I just can't recommend it. Instead of resolve, the characters unraveled and I closed the book feeling as if I'd been dragged through a saga that never had resolve. It was harrowing without hope, and I felt consistently alienated from the characters due to their lack of compassion for anyone.

Chris Cleave is a fantastically gifted writer. But boy wears me out.